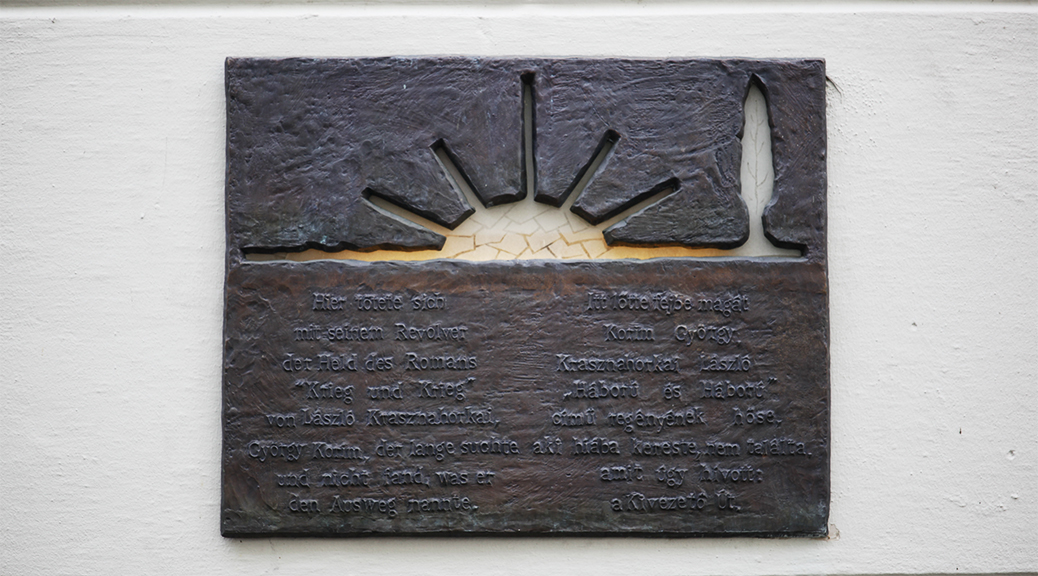 Mario Merz’s igloos in the Hallen für Neue Kunst, Schaffhausen have found their way into literature in 1999 with the novel “War and War” by Hungarian writer Laszlo Krasznahorkai. The hero of the novel, the archivist Gyorgy Korim, driven by an inner mission, travels from an east-hungarian province via numerous detours to New York. Inspired by a photo of Mario Merz’s igloos, he finally travels to Schaffhausen to find peace near the works of Mario Merz in the Hallen für Neue Kunst. The last sentence of the novel, is not written in the book, but on a plaque by Hungarian sculptor Imre Bukta, which Urs Raussmüller has had attached to the Hallen für Neue Kunst in memory of Korim. After the closing of the institution in Schaffhausen in 2014 the plaque together with the igloos by Mario Merz came to Basel to the Raussmüller Collection. The plaque says (in German and Hungarian):

Here killed himself with his revolver the hero of Laszlo Krasznahorkai’s novel “War and War”, György Korim, who lengthily searched but never found what he called the way out.

The novel “War and War” has by now been translated to numerous languages. The author Laszlo Krasznahorkai has been awarded the Man Booker International Prize 2015. His books are translated by George Szirtes and published in English at New Directions Publishing.