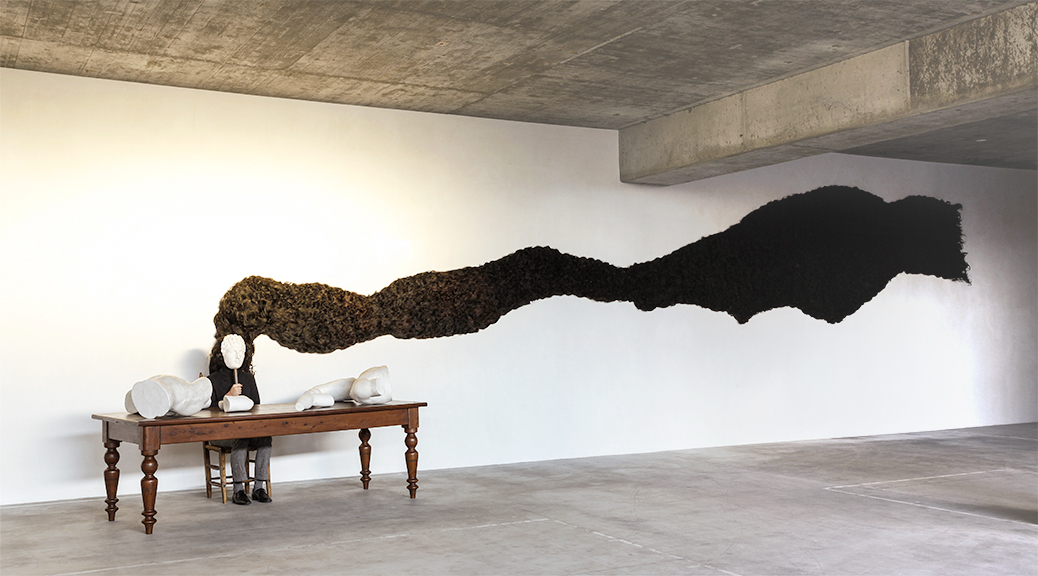 “Frammenti di memoria” – fragments of memory – lie as plaster pieces that associate an antique sculpture, probably an Apollo, almost weightless on a long table. In an earlier action, a person sat here like an actor from antiquity and held Apollo’s mask in front of his face. The person figuratively supplants the Greek god, who is both the God of the arts as well as prophecy (see also Kounellis’ “Apollo” from 1973; Hallen program 2/2012). A ten-meter strand of authentic dark hair extends from the mask; it spreads onto the wall like a cloud of smoke and seems to symbolize the god’s power. In antiquity, the younglings consecrated their hair to the gods upon becoming men and being admitted to society. It was a request for protection in the future; one suspected that hair was a powerful source of vitality. In Kounellis’ work, the physical presence of the massive mane of hair releases a force that expands into the space as a fascinating and cryptic tension. It creates a maelstrom from which the observer’s fantasy can hardly escape.

The large installation is one of the Greek artist Jannis Kounellis’ major works. Created from the stock of his mythological vocabulary, forms and materials enter into a connection with ultimate intensity – a metaphorical unification of past and future. In Kounellis’ oeuvre, “Senza titolo” became a starting point for further compositions with multi-faceted levels of meaning. In the transition from fragments derived from antiquity into a vivid current of hair, it marks a highlight within a metamorphosis of his work; its traces reach all the way into Kounellis’ late period.