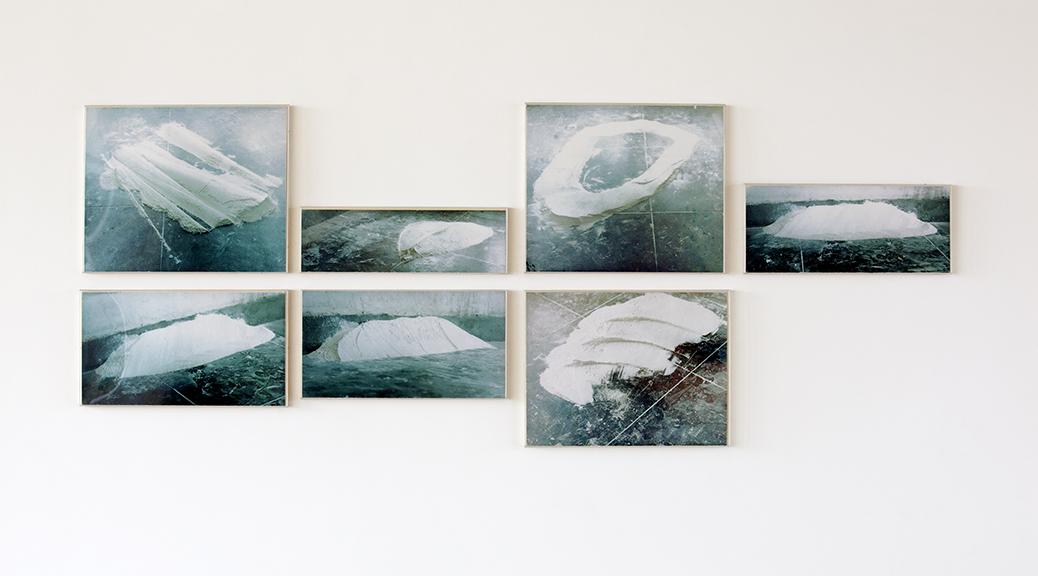 Attracted by the amorphous white shapes on a greenish background, the viewers approach the seven photographs to discover what is being represented here. Many see islands in the ocean; others see modern architecture. In any case, they seem to be photos taken from a certain distance – probably, one could assume, aerial shots.

However, even looking at them from up close doesn’t serve to alleviate the irritation. So you search for an explanation by asking for the title. The answer doesn’t help everyone, because you really don’t see flower arrangements. Until the moment of insight occurs: it’s not about flowers, but rather flour. Nauman constantly rearranged the white material on the floor of his vacated studio into new forms and then photographed them. The shapes on the photos – much smaller than you expect at first – are thus the result of a sculptural act. But this isn’t the actual work yet; the seven selected photos aren’t the work either. The actual work is the all-encompassing process: from the premeditated arrangement of the flour to the photographic recording of the shapes and the connection of the images with the misleading title… on up to the process of insight in the viewer’s consciousness.

In the development of art, the “Flour Arrangement” is a milestone, and it is exemplary for Nauman’s great influence on younger artists. For the first time, and without a precursor, he introduced photography as a complementary artistic medium and, with surprisingly simple means, created a double disassociation. By photographing his flour arrangements, he reduced the recognizability of its materiality and dimensions. With the play on words in the title, he also made it harder to understand. Nauman thus creates a challenge for perceiving the work that almost forces the viewer to relieve the confusion. Hardly another work exists in which materials and media are used in such a simultaneously succinct and accurate way to create an irritation that turns the viewers into participants in an artist-defined process. – This is the only existing edition of these seven color photos.